Utopias are easy to imagine, but a lot harder to make into a reality. Clear, early promises find themselves crashing up against real-world complexities, human nature and the crushing truth that those early promises may not have been so clearly thought through after all.

The early days of cryptocurrencies had lots of promises. Phrases like ‘the democratisation of finance’ littered blogs and think-pieces, and people from all sides of the political spectrum twisted cryptocurrency to fit their own viewpoint, conjuring up a utopia that suited them.

The reality has become, like everything else, much more complex. The rise and (current) fall of the most well-known cryptocurrency, Bitcoin, has been replicated across the ‘wild-west’ style creation of rival crypto coins that have flooded the market. This instability is not it’s only weakness, either.

The energy consumption used by cryptocurrencies has become a real worry for those battling climate change. It’s estimated that Bitcoin alone currently consumes an estimated 150 terawatt-hours of electricity annually — more than the entire country of Argentina (a population of 45 million).

But what of the technology itself? Phrases like ‘the democratisation of finance’ were quickly followed by the classic ‘Bitcoin won’t change the world, but the technology behind it will’, pointing towards blockchain technology and its potential applications in a plethora of areas.

This is one of those promises that is indeed becoming true. Blockchain technology is being used in the medical field, in supply chains, by governments in lots of areas, and other industries from real estate to the payments sector.

“We see opportunity in that area coming from the blockchain technology acting as a ledger tracking the payment, and giving everyone transparency in the process, not from volatile cryptocurrencies’ said Terry Clune, TransferMate founder, during a recent interview with PYMNTS.com.

This is not to say cryptocurrencies won’t play a big part in future payments, but that the volatility problem will need to be solved. This is where ‘stablecoins’ come into the picture.

Unlike cryptocurrencies like Bitcoin, whose value is based purely on market forces, stablecoins are pegged to assets, like fiat currencies such as the US Dollar or Euro. They could also be pegged to precious metals such as gold.

Now, while fiat currencies haven’t exactly been the paradigms of stability lately, their fluctuations can generally be judged over months and years rather than days or weeks. What’s more, their value is more based on real-world economics rather than investor feelings (there are many respected economists that would argue vigorously with that statement, but it is generally true).

Another key factor to the stability of fiat currencies is the regulation and security that surrounds the cryptocurrency. Businesses need to have the knowledge that their transactions are happening in a lawful, regulated environment. Without that core foundation, the risk factor makes any moves towards cryptocurrencies as a way to transfer money a no-go.

“We’re regulated by central banks right across the world so we can administer transactions’ said Terry Clune in the same interview. ‘Whether you’re moving fiat currencies or cryptocurrencies, regulation is going to be core to how it happens in the future. Regulator are going to be requiring that any money movement is administered by regulated entities. The wild west that we talk about now is clearly going to be turned into a much more controlled environment.”

Stablecoins are not currently regulated in any meaningful way, particularly in terms of international money movement. This may change soon in some major jurisdictions, such as the UK, but nothing is set in stone as of yet even there.

Taking a step back then, stablecoins value are based on something tangible, and are therefore less risky to use as currency to buy goods and services in the medium to long-term, but the market they are created, held and operate in is not regulated. The reality therefore is that it’s unlikely businesses will use stablecoins at a large scale any time in the near future.

And now we come to the point where we must add a third term to the ‘cryptocurrencies’ and ‘stablecoins’ debate – a CBDC, or ‘central bank digital currency’ (as is usually the case, governments show a lot less creativity than the marketplace for naming new innovations).

Essentially, the difference between a stablecoin and a CBDC is that the latter would be backed with reserves at the issuing countries’ central bank. In other words, it’s a government-backed stablecoin, and therefore regulated.

There are two models of CBDCs being discussed – retail and wholesale. A wholesale CBDC is for financial institutions that hold reserve deposits with a central bank. A retail CBDC is one that will be issued for the general public.

Last year, the U.S. Securities and Exchange Commission Chair Gary Gensler called for cryptocurrency markets to be regulated while Jerome Powell, Chair of the Federal Reserve, called for the same to be done for stablecoins. Current Vice Chair of the Federal Reserve, Lael Brainard, said that the creation of a central bank digital currency (CBDC) should be explored in response to stablecoins.

We can now see the evolution in the marketplace taking shape. Cryptocurrencies were created but were highly volatile and risky, stablecoins were created to reduce (but not eliminate) this volatility and risk, and now government-backed CBDCs are being proposed to bring a robust legal and economic framework to wrap around crypto technology in order to create a stable marketplace.

And finally, there is a fourth option emerging that we should mention in passing – Tokenized fiat cryptocurrencies. This is essentially a digital representation of a fiat currency, like a dollar, on the blockchain. We could very well see this in the long-term future, with cash and assets being digitized and traditional methods of fiat currency distribution (like the humble bank note) becoming entirely digital.

Why does this all matter? What are the benefits of crypto payments anyway?

This all sounds like the evolution of cryptocurrencies is actually a return to the where we started – CBDCs sound a lot like fiat currencies but by another name. This is not the case though. It’s where that original ‘Bitcoin won’t change the world, but the technology behind it will’ comes back into play.

There is no doubt that a crypto-based payments system would be radically different than one based on the movement of fiat currencies. But why? What are the benefits?

In the current SWIFT system of international payments – still 98% of the payments market in terms of volume – international payments go through a pass-the-parcel type of process where lots of banks can handle a payment, each taking a cut and incurring high FX fees. With crypto, this chain is essentially truncated between sender and receiver, cutting out those additional costs.

While regulated institutions will still charge fees for handling this money transfer efficiently and securely, it will be in a much more cost-effective and transparent way. How FX-type fees will play out when one CBDC is exchanged with another is an interesting aspect to watch closely.

Blockchain technology allows us to fully track and trace a payment, and store that data. Not only will this bring further transparency in the international payment process, it can also be used to increase the security behind the payment.

Moving away from a cash run financial system also removes many of the methods criminals use for money laundering and other nefarious activities – although we can be sure that they’ll find new methods leveraging crypto technology.

At the same time, speed of payments would also be increased without necessarily compromising this security. Payments using crypto technologies would be, for the most part, instantaneous.

The reality of the financial ecosystem is that many banks don’t want to serve certain markets, as there is not enough profit in them. In this way, large swaths of the world population are cut out of the banking world. With cryptocurrencies, people can send and receive payments without even having a bank account and access the financial system at lower costs and with less barriers to entry.

Will cryptocurrencies, stablecoins or CBDCs be the future of international payments?

Any person that has the answer to the above question please get in touch. It’s really impossible to know, but we can take educated guesses.

Cryptocurrencies like Bitcoin will almost certainly continue to play a role in the payment’s marketplace, particularly amongst consumers. There are advantages to a decentralized currency, but many of those advantages aren’t with businesses, so we can, with reasonable safety, remove cryptocurrencies of this type from the future of international B2B payments at a large scale.

It should also be noted that cryptocurrencies are likely to continue to play a large role in the black markets and in criminal circles.

Stablecoins are an interesting proposition, especially if some emerge as a truly international currency that businesses can use across borders in a stable manner. Most likely the practical way it’ll play out is by using fiat (or CBDCs) to buy these stablecoins (using regulated institutions), complete a transaction, and then convert them back.

“With our solution at TransferMate, we can empower on-ramp and off-ramp from the stablecoin interface and back again [by leveraging] the regulatory approvals we have secured from central banks worldwide to release the payments and administer those transactions” said Terry Clune, commenting on this process and how it might work in the future.

Stablecoin hedging could well become a key part of a treasury departments job in the medium future. More likely, though, is that hedging will be with the more (in theory) stable CBDCs.

CBDCs seem the most likely end goal of all this crypto evolution. They will be less risky and volatile than the other options and be fully regulated from start to finish. The result will look very much like how fiat currencies currently work, but by using the blockchain technology to bring additional benefits to businesses using them.

A major caveat here is the cautious approach governments are taking on creating CBDCs. While this caution is understandable, it does open the possibility of stablecoins (or even cryptocurrencies) to grab such a sizeable share of the payments space that CBDCs never really get off the ground.

Crypto and the future of international payments

Cryptocurrencies have challenged the hegemony of fiat currencies that has existed for centuries and have in turn pushed people and businesses to innovate and match their benefits, while reducing their pitfalls.

That future may be nearer than we think, it just won’t be the utopia some like to imagine.

If you want to talk to the TransferMate team on how you can make efficient, cost-effective and transparent payments right now (without the need for risky cryptocurrencies), contact us here. 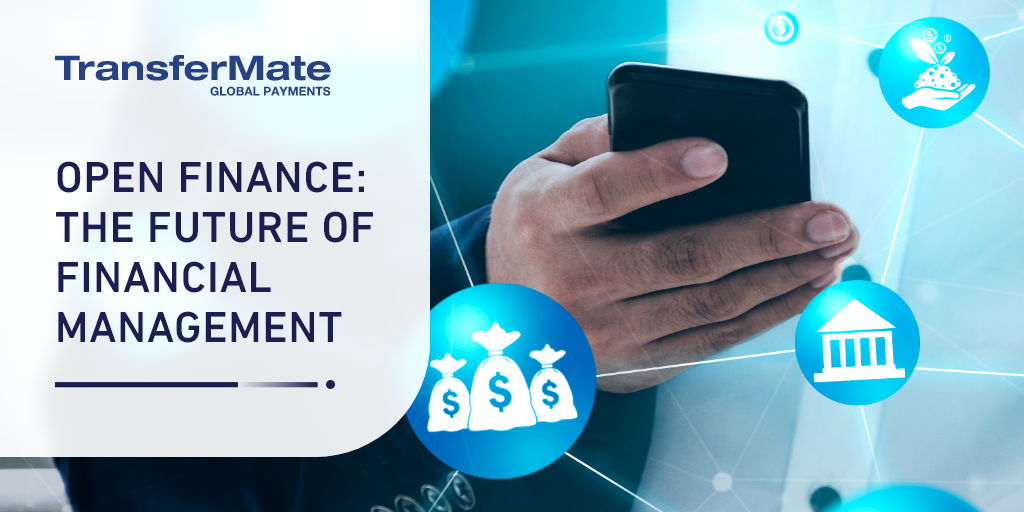 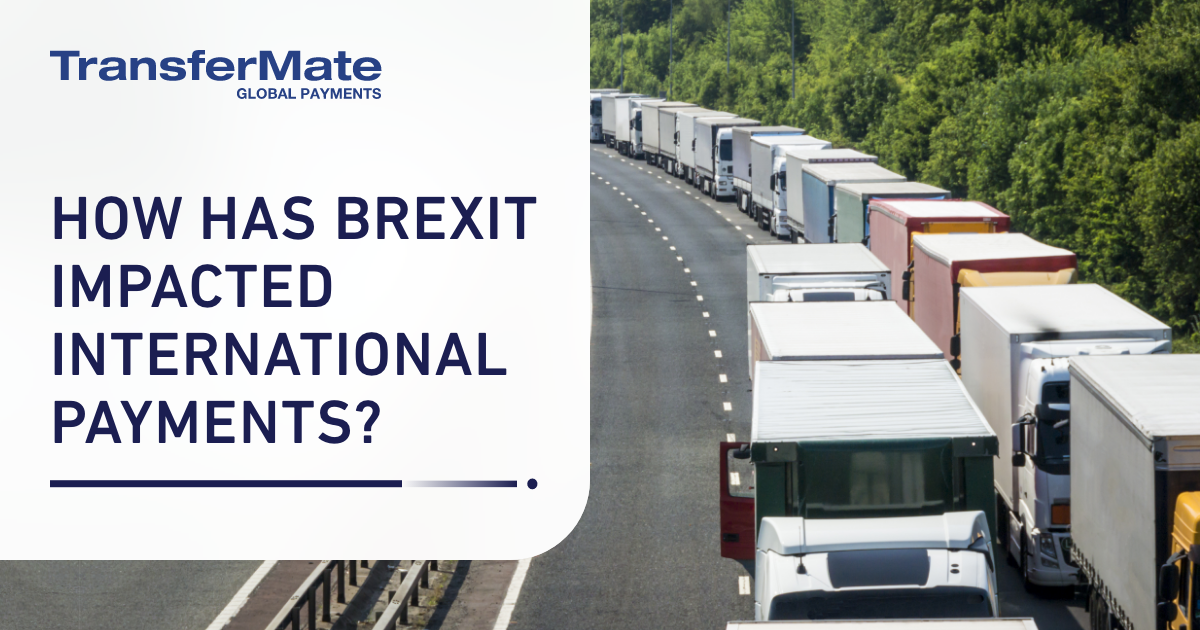 How has Brexit impacted international payments? 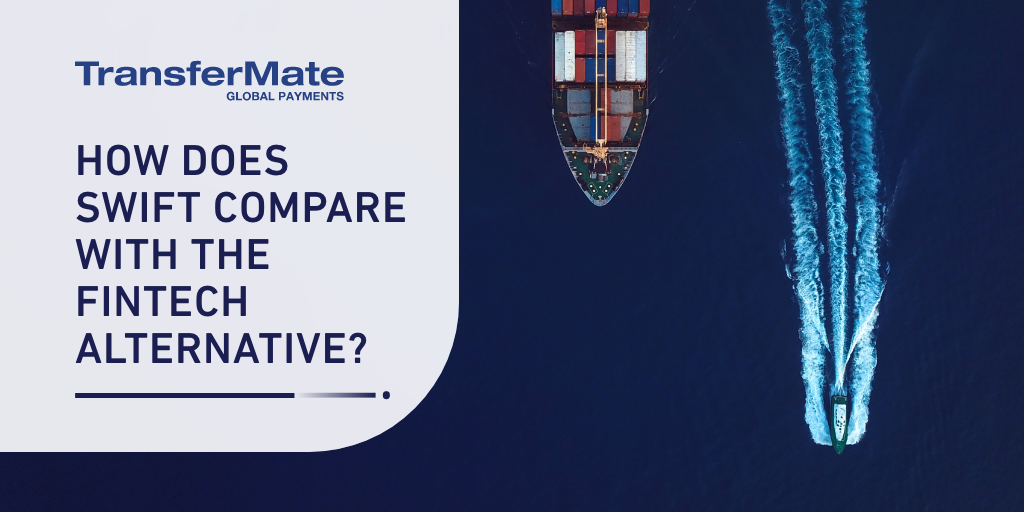 How does SWIFT compare with the fintech alternative?